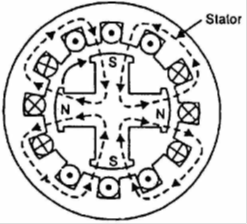 The treatment developed so far is applicable only to cylindrical rotor machines. In these machines, the air-gap is uniform so that the reluctance of the magnetic path is the same in all directions. Therefore, the effect of armature reaction can be accounted for by one reactance—the synchronous reactance Xs. It is because the value of Xs is constant for all directions of armature flux relative to the rotor.

However, in a salient-pole machine, the radial length of the air-gap varies [See Fig. (1)] so that reluctance of the magnetic circuit along the polar axis (called direct axis or d-axis) is much less than the reluctance along the interpolar axis (called quadrature axis or q-axis). This is illustrated in Fig. (2).

Because of the lower reluctance along the polar axis (i.e., d-axis), more flux is produced along d-axis than along the q-axis. Therefore, reactance due to armature reaction will be different along d-axis and q-axis. These are: