Note that E1 is the phase value and so is I1. 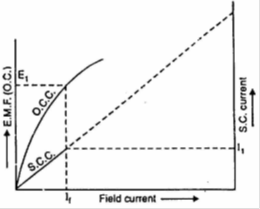 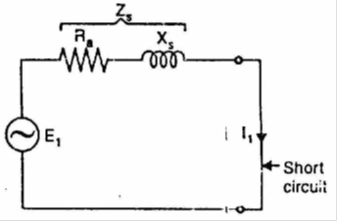 (iii) The armature resistance can be found as

(iv) Once we know Ra and Xs, the phasor diagram can be drawn for any load and any p.f. Fig. (3) shows the phasor diagram for the usual case of inductive load; the load p.f. being cos Φ lagging. Note that in drawing the phasor diagram, current Ia has been taken as the reference phasor. The IaRa drop is in phase with Ia while IaXs drop leads Ia by 90°. The phasor sum of V, IaRa and IaXs gives the no-load e.m.f. E0.

This method if easy but it gives approximate results. The reason is simple. The combined effect of XL (armature leakage reactance) and XAR (reactance of armature reaction) is measured on short-circuit. Since the current in this condition is almost lagging 90°, the armature reaction will provide its worst demagnetizing effect. It follows that under any normal operation at, say 0.8 or 0.9 lagging power factors will produce error in calculations. This method gives a value higher than the value obtained from an actual load test. For this reason, it is called pessimistic method.