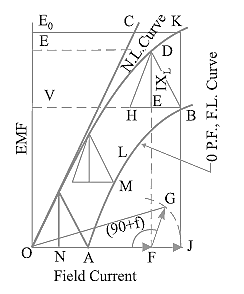 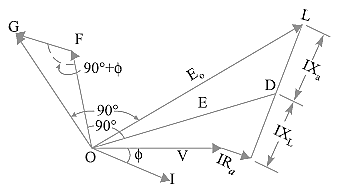 Potier method is based on the separation of armature-leakage reactance drop and the armature reaction effects. Hence, it gives more accurate results. It makes use of the first two methods to some extent. The experimental data required is (i) no-load curve and (ii) full-load zero power factor curve (not the short-circuit characteristic) also called wattless load characteristic. It is the curve of terminal volts against excitation when armature is delivering F.L. current at zero p.f.

It should be noted that if we vectorially add to V the drop due to resistance and leakage reactance XL, we get E. If to E is further added the drop due to armature reaction (assuming lagging p.f.), then we get E0.

The zero p.f. lagging curve can be obtained.

(a) if a similar machine is available which may be driven at no-load as a synchronous motor at practically zero p.f. or

(c) by connecting the alternator to a 3-φ line with ammeters and wattmeters connected for measuring current and power and by so adjusting the field current that we get full- load armature current with zero wattmeter reading.

Point B (Fig. 1) was obtained in this manner when wattmeter was reading zero. Point A is obtained from a short-circuit test with full-load armature current. Hence, OA represents field current which is equal and opposite to the demagnetising armature reaction and for balancing leakage reactance drop at full-load (please refer to A.T. method). Knowing these two points, full-load zero p.f. curve AB can be drawn as under.

From B, BH is drawn equal to and parallel to OA. From H, HD is drawn parallel to initial straight part of N-L curve i.e. parallel to OC, which is tangential to N-L curve. Hence, we get point D on no-load curve, which corresponds to point B on full-load zero p.f. curve. The triangle BHD is known as Potier triangle. This triangle is constant for a given armature current and hence can be transferred to give us other points like M, L etc. Draw DE perpendicular to BH. The length DE represents the drop in voltage due to armature leakage reactance XL i.e. I.XL. BE gives field current necessary to overcome demagnetising effect of armature reaction at full load and EH for balancing the armature leakage reactance drop DE. Let V be the terminal voltage on full-load, then if we add to it vectorially the voltage drop due to armature leakage reactance alone (neglecting Ra), then we get voltage E = DF (and not E0). Obviously, field excitation corresponding to E is given by OF. NA ( = BE) represents the field current needed to overcome armature reaction. Hence, if we add NA vectorially to OF (as in Rothert’s A.T. method) we get excitation for E0 whose value can be read from N-L curve. In Fig. 1, FG (= NA) is drawn at an angle of (90° φ) for a lagging p.f. (or it is drawn at an angle of 90° − φ for a leading p.f.). The voltage corresponding to this excitation is JK = E0

The vector diagram is also shown separately in Fig. 2. Assuming a lagging p.f. with angle φ, vector for I is drawn at an angle of φ to V. IRa is drawn parallel to current vector and IXL is drawn perpendicular to it. OD represents voltage E. The excitation corresponding to it i.e.. OF is drawn at 90° ahead of it. FG (= NA = BE in Fig. 1) representing field current equivalent of full-load armature reaction, is drawn parallel to current vector OI. The closing side OG gives field excitation for E0. Vector for E0 is 90° lagging behind OG. DL represents voltage drop due to armature reaction.