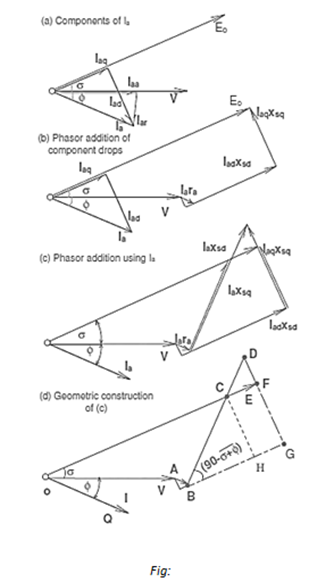 In fact, the direct-axis component Fad acts over a magnetic circuit identical with that of the main field system and produces a comparable effect while the quadrature-axis component Faq acts along the interpolar space, resulting in an altogether smaller effect and, in addition, a flux distribution totally different from that of Fad or the main field m.m.f. This explains why the application of cylindrical-rotor theory to salient-pole machines for predicting the performance gives results not conforming to the performance obtained from an actual test.

Blondel’s two-reaction theory considers the effects of the quadrature and direct-axis components of the armature reaction separately. Neglecting saturation, their different effects are considered by assigning to each an appropriate value of armature-reaction “reactance,” respectively xad and xaq . The effects of armature resistance and true leakage reactance ( xl ) may be treated separately, or may be added to the armature reaction coefficients on the assumption that they are the same, for either the direct-axis or quadrature-axis components of the armature current (which is almost true). Thus the combined reactance values can be expressed as:

for the direct- and cross-reaction axes respectively. These values can be determined experimentally. In a salient-pole machine, xaq, the cross- or quadrature-axis reactance is smaller than xad, the direct-axis reactance, since the flux produced by a given current component in that axis is smaller as the reluctance of the magnetic path consists mostly of the interpolar spaces. It is essential to clearly note the difference between the quadrature- and direct-axis components Iaq, and Iad of the armature current Ia, and the reactive and active components Iaa and Iar. Although both pairs are represented by phasors in phase quadrature, the former are related to the induced emf Et while the latter are referred to the terminal voltage V. These phasors are clearly indicated with reference to the phasor diagram of a (salient pole) synchronous generator supplying a lagging power factor (pf) load, shown in Fig 1(a). We have

The phasor diagram Fig.1 shows the two reactance voltage components Iaq *xsq and Iad * xsd which are in quadrature with their respective components of the armature current. The resistance drop Ia * Ra is added in phase with Ia although we could take it as Iaq * Ra and Iad * Ra separately, which is unnecessary as

Actually it is not possible to straight-away draw this phasor diagram as the power angle σ is unknown until the two reactance voltage components Iaq * xsq and Iad * xsd are known. However this difficulty can be easily overcome by following the simple geometrical construction shown in Fig. 1(d), assuming that the values for terminal voltage V , the load power factor (pf) angle ‑ and the two synchronous reactances xsd and xsq are known to us. The resistance drop Ia * Ra (length AB) is added to the tip of the voltage phasor (OA) in phase with the current phasor (i.e. in a direction parallel to OQ ). Then we draw line BC ( of length equal to Ia * xsq ) and extend it to D such that BD will be (of length equal to Ia * xsd ) at the extremity B of Ia * Ra and at right-angles to Ia . Draw OC and extend it (to F). From D draw the perpendicular DF on OC extended. Then OF represents the induced voltage Et. The proof for this can be given as follows:  If DF is extended to G such that this line is perpendicular to BG drawn parallel to OF, we have: