Effect of change of fuel supply: 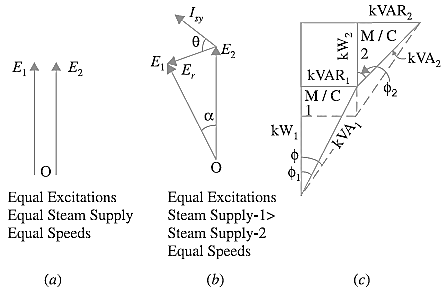 This can be made possible only when rotor No. 1 advances its angular position with respect to No. 2 as shown in Fig. 1 (b) where E1 is shown advanced ahead of E2 by an angle α. Consequently, resultant voltage Er (or Esy) is produced which, acting on the local circuit, sets up a current Isy which lags by almost 90° behind Er but is almost in phase with E1 (so long as angle α is small).

Hence, power per phase of No. 1 is increased by an amount = E1Isy whereas that of No. 2 is decreased by the same amount (assuming total load power demand to remain unchanged). Since Isy has no appreciable reactive (or quadrature) component, the increase in steam supply does not disturb the division of reactive powers, but it increases the active power output of alternator No. 1 and decreases that of No. 2. Load division, when steam supply to alternator No. 1 is increased, is shown in Fig. 1 (c). So, it is found that by increasing the input to its prime mover, an alternator can be made to take a greater share of the load, though at a different power factor.

The points worth remembering are:

1. The load taken up by an alternators directly depends upon its driving torque or in other words, upon the angular advance of its rotor.

2. The excitation merely changes the p.f. at which the load is delivered without affecting the load so long as steam supply remains unchanged.

3. If input to the prime mover of an alternator is kept constant, but its excitation is changed, then kVA component of its output is changed, not kW.