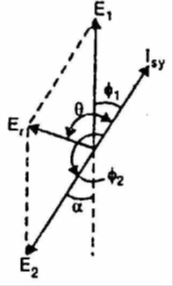 Suppose, due to any reason, the speed of machine 2 falls. Then e.m.f. E2 will fall back by a phase angle of a electrical degrees as shown in Fig. (1) (though still E1 = E2). There will be resultant e.m.f. Er in the closed circuit formed by the two alternators. This e.m.f. Er will circulate current (known as synchronizing current Isyt) in this closed circuit.

Ra = armature resistance of each alternator

Xs = synchronous reactance of each alternator

Zs = synchronous impedance of each alternator

Since Ra is very small as compared to Xs, θ is nearly 90° so that the current Isy is almost in phase with E1 and in phase opposition to E2. This means that machine 1 is generating and machine 2 is motoring. Consequently, machine 1 tends to slow down and machine 2, by accepting power, tends to accelerate. This restores the status quo i.e., synchronism is re-established. Conversely, if E2 tends to advance in phase [See Fig. (2)], the directions of Er and Isy are changed such that now machine 2 is generating and machine 1 is motoring. Once again the synchronism is restored.

Effect of inequality of e.m.f.s : 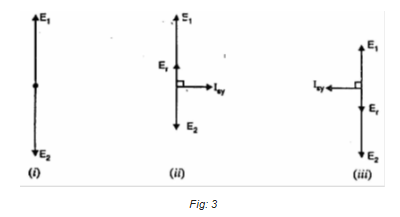 The automatic re-establishment of synchronism of two alternators operating in parallel also extends to any changes tending to alter the individual e.m.f.s. When in exact synchronism, then E1 = E2 (magnitude) and they are in exact phase opposition as shown in Fig. (3 (i)). Suppose due to any reason, e.m.f. E1 increases. Then resultant e.m.f. Er exists in the closed circuit formed by the two alternators. Then Er = E1 - E2 and is in phase with E1.