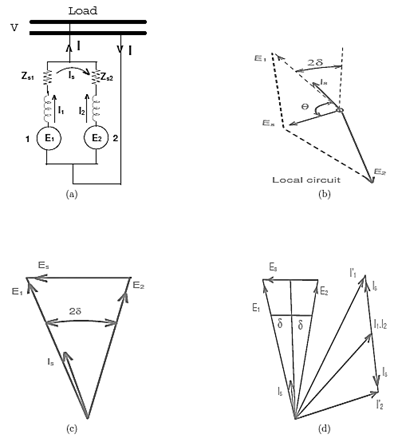 When two synchronous generators are connected in parallel, they have an inherent tendency to remain in step, on account of the changes produced in their armature currents by a divergence of phase. Consider identical machines 1 and 2, Fig. 1 in parallel and working on to the same load. With respect to the load, their e.m.fs are normally in phase: with respect to the local circuit formed by the two armature windings, however, their e.m.fs are in phase-opposition.

Suppose there to be no external load. If machine 1 for some reason accelerates, its e.m.f. will draw ahead of that of machine 2. The resulting phase difference 2 causes e.m.fs to lose phase-opposition in the local circuit so that there is in effect a local e.m.f  Es which will circulate a current Is in the local circuit of the two armatures. The current Is flows in the synchronous impedance of the two machines together, so that it lags by θ = arc tan(xs/r) ≈ 90◦ on Es on account of the preponderance of reactance in ZsIs therefore flows out of machine 1 nearly in phase with the e.m.f., and enters 2 in opposition to the e.m.f. Consequently machine 1 produces a power Ps≈ E1Is as a generator, and supplies it (I2R losses excepted) to 2 as a synchronous motor. The synchronizing power Ps tends to retard the faster machine 1 and accelerate the slower, 2, pulling the two back into step. Within the limits of maximum power, therefore, it is not possible to destroy the synchronous running of two synchronous generators in parallel, for a divergence of their angular positions results in the production of synchronizing power, which loads the forward machine and accelerates the backward machine to return the two to synchronous running.

The development of synchronizing power depends on the fact that the armature impedance is preponderating reactive. If it were not, the machines could not operate stably in parallel: for the circulating current Is would be almost in phase quadrature with the generated e.m.f.’s, and would not contribute any power to slow the faster or speed up the slower machine.

When both machines are equally loaded pn to an external circuit, the synchronizing power is developed in the same way as on no load, the effect being to reduce the load of the slower machine at the same time as that of the faster machine is increased. The conditions are shown in Fig. 1, where I1, I2 are the equal load currents of the two machines before the occurrence of phase displacement, and I′1, I′2 are the currents as changed by the circulation of the synchronizing current Is.

The argument above has been applied to identical machines. Actually, it is not essential for them to be identical, nor to have equal excitations or power supplies.

In general, the machines will have different synchronous impedance Zs1, Zs2; different e.m.f.’s E1 and E2 and different speed regulations. The governors of prime movers are usually arranged so that a reduction of the speed of the prime mover is necessary for the increase of the power developed. Unless the governor speed/load characteristics are identical the machines can never share the total load in accordance with their ratings. The governor characteristics take the form shown in Fig. 2. If the two are not the same, the load will be shared in accordance with the relative load values at the running speed, for synchronous machines must necessarily run at identical speeds.