(i) By Three Lamp (one dark, two bright) method
(ii) By synchroscope

In this method of synchronizing, three lamps L1, L2 and L3 are connected as shown in Fig. (1). The lamp L1 is straight connected between the corresponding phases (R1 and R2) and the other two are cross-connected between the other two phases. Thus lamp L2 is connected between Y1 and B2
and lamp L3 between B1 and Y2. When the frequency and phase of the voltage of the incoming alternator is the same as that of the busbars, the straight connected lamps L1 will be dark while cross-connected lamps L2 and L3 will be equally bright. At this instant, the synchronization is perfect and the switch of the incoming alternator can be closed to connect it to the busbars. 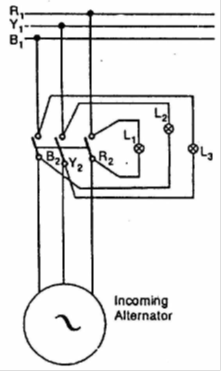 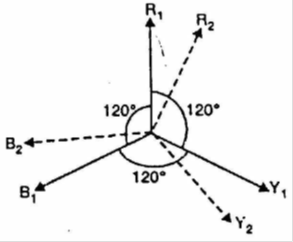