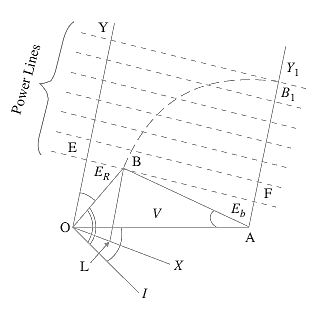 In Fig., OA represents applied voltage /phase of the motor and AB is the back e.m.f. / phase, Eb. OB is their resultant voltage ER. The armature current is OI lagging behind ER by an angle θ =tan−1XS / Ra. Value of I = ER / ZS. Since ZS is constant, ER or vector OB represents (to some suitable scale) the main current I. OY is drawn at an angle φ with OB (or at an angle θ with CA). BL is drawn perpendicular to OX which is at right angles to OY. Vector OB, when referred to OY, also represents, on a different scale, the current both in magnitude and phase.

The power input / phase of the motor

As V is constant, power input is dependent on BL. If motor is working with a constant intake, then locus of B is a straight line || to OX and ⊥ to OY i.e. line EF for which BL is constant. Hence, EF, represents a constant-power input line for a given voltage but varying excitation.

Similarly, a series of such parallel lines can be drawn each representing a definite power intake of the motor. As regards these constant-power lines, it is to be noted that

1. For equal increase in intake, the power lines are parallel and equally-spaced

3. The perpendicular distance from B to OX (or zero power line) represents the motor intake

4. If excitation is fixed i.e. AB is constant in length, then as the load on motor is increased, increases. In other words, locus of B is a circle with radius = AB and centre at A. With increasing load, B goes on to lines of higher power till point B1 is reached. Any further increase in load on the motor will bring point B down to a lower line. It means that as load increases beyond the value corresponding to point B1, the motor intake decreases which is impossible. The area to the right of AY 1 represents unstable conditions. For a given voltage and excitation, the maximum power the motor can develop, is determined by the location of point B1 beyond which the motor pulls out of synchronism.