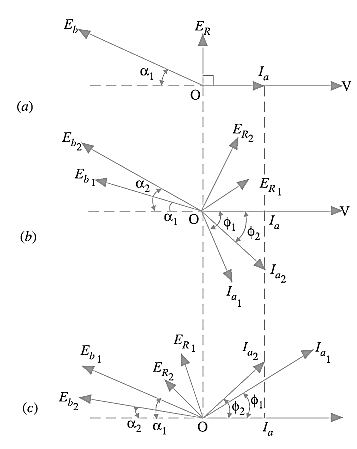 As shown in Fig.  (a), suppose a synchronous motor is operating with normal excitation (Eb = V) at unity p.f. with a given load. If Ra is negligible as compared to XS, then Ia lags ER by 90º and is in phase with V because p.f. is unity. The armature is drawing a power of V.Ia per phase which is enough to meet the mechanical load on the motor. Now, let us discuss the effect of decreasing or increasing the field excitation when the load applied to the motor remains constant.

As shown in Fig.  (b), suppose due to decrease in excitation, back e.m.f. is reduced to Eb1 at the same load angle α1. The resultant voltage ER1 causes a lagging armature current Ia1 to flow. Even though Ia1 is larger than Ia in magnitude it is incapable of producing necessary power VIa for carrying the constant load because Ia1 cos φ1 component is less than Ia so that VIa1 cos φ1 < VIa. Hence, it becomes necessary for load angle to increase from α1 to α2. It increases back e.m.f. from Eb1 to Eb2 which, in turn, increases resultant voltage from ER1 to ER2. Consequently, armature current increases to Ia2 whose in-phase component produces enough power (VIa2 cos φ2) to meet the constant load on the motor.

The effect of increasing field excitation is shown in Fig. (c) where increased Eb1 is shown at the original load angle α1. The resultant voltage ER1 causes a leading current Ia1 whose in-phase component is larger than Ia. Hence, armature develops more power than the load on the motor. Accordingly, load angle decreases from α1 to α2 which decreases resultant voltage from ER1 to ER2. Consequently, armature current decreases from Ia1 to Ia2 whose in-phase component Ia2 cos φ2 = Ia. In that case, armature develops power sufficient to carry the constant load on the motor. Hence, we find that variations in the excitation of a synchronous motor running with a given load produce variations in its load angle only.