Construction of the Circle Diagram

Construction of the Circle Diagram: 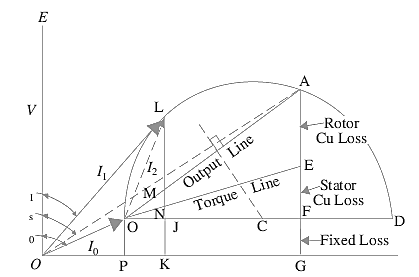 Circle diagram of an induction motor can be drawn by using the data obtained from (1) no-load (2) short-circuit test and (3) stator resistance test, as shown below.

From no-load test, I0 and φ0 can be calculated. Hence, as shown in Fig. 1, vector for I0 can be laid off lagging φ0 behind the applied voltage V.

Next, from blocked rotor test or short-circuit test, short circuit current ISN corresponding to normal voltage and φS are found. The vector OA represents ISN = (ISV/VS ) in magnitude and phase. Vector O′A represents rotor current I2′ as referred to stator. Clearly, the two points O′ and A lie on the required circle. For finding the centre C of this circle, chord O′A is bisected at right angles–its bisector giving point C.

The diameter O′D is drawn perpendicular to the voltage vector. As a matter of practical contingency, it is recommended that the scale of current vectors should be so chosen that the diameter is more than 25 cm, in order that the performance data of the motor may be read with reasonable accuracy from the circle diagram. With centre C and radius = CO′, the circle can be drawn. The line O′A is known as out-put line. It should be noted that as the voltage vector is drawn vertically, all vertical distances represent the active or power or energy components of the currents.

For example, the vertical component O′P of no-load current OO′ represents the no-load input, which supplies core loss, friction and windage loss and a negligibly small amount of stator I2R loss. Similarly, the vertical component AG of short-circuit current OA is proportional to the motor input on short circuit or if measured to a proper scale, may be said to equal power input.