One of the advantages of the slip-ring motor is that resistance may be inserted in the rotor circuit to obtain high starting torque (at low starting current) and then cut out to obtain optimum running conditions. However, such a procedure cannot be adopted for a squirrel cage motor because its cage is permanently short-circuited. In order to provide high starting torque at low starting current, double-cage construction is used.

As the name suggests, the rotor of this motor has two squirrel-cage windings located one above the other as shown in Fig. (1 (i)).

(i) The outer winding consists of bars of smaller cross-section short-circuited by end rings. Therefore, the resistance of this winding is high. Since the outer winding has relatively open slots and a poorer flux path around its bars [See Fig. (1 (ii))], it has a low inductance. Thus the resistance of the outer squirrel-cage winding is high and its inductance is low. 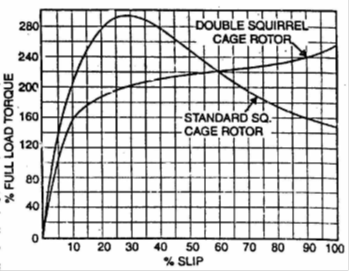 When a rotating magnetic field sweeps across the two windings, equal e.m.f.s are induced in each.

(i) At starting, the rotor frequency is the same as that of the line (i.e., 50 Hz), making the reactance of the lower winding much higher than that of the upper winding. Because of the high reactance of the lower winding, nearly all the rotor current flows in the high-resistance outer cage winding. This provides the good starting characteristics of a high-resistance cage winding. Thus the outer winding gives high starting torque at low starting current.

(ii) As the motor accelerates, the rotor frequency decreases, thereby lowering the reactance of the inner winding, allowing it to carry a larger proportion of the total rotor current At the normal operating speed of the motor, the rotor frequency is so low (2 to 3 Hz) that nearly all the rotor current flows in the low-resistance inner cage winding. This results in good operating efficiency and speed regulation. Fig. (2) shows the operating characteristics of double squirrel-cage motor. The starting torque of this motor ranges from 200 to 250 percent of full-load torque with a starting current of 4 to 6 times the full-load value. It is classed as a high-torque, low starting current motor.