Induction motors, particularly the squirrel-cage type, sometimes exhibit a tendency to run stably at speeds as low as one-seventh of their synchronous speed Ns. This phenomenon is known as crawling of an induction motor.

This action is due to the fact that the a.c. winding of the stator produces a flux wave, which is not a pure sine wave. It is a complex wave consisting of a fundamental wave, which revolves synchronously, and odd harmonics like 3rd, 5th, and 7th etc. which rotate either in the forward or backward direction at Ns / 3, Ns / 5 and Ns / 7 speeds respectively. As a result, in addition to the fundamental torque, harmonic torques are also developed, whose synchronous speeds are 1/nth of the speed for the fundamental torque i.e. Ns / n, where n is the order of the harmonic torque. Since 3rd harmonic currents are absent in a balanced 3-phase system, they produce no rotating field and, therefore, no torque. Hence, total motor torque has three components : 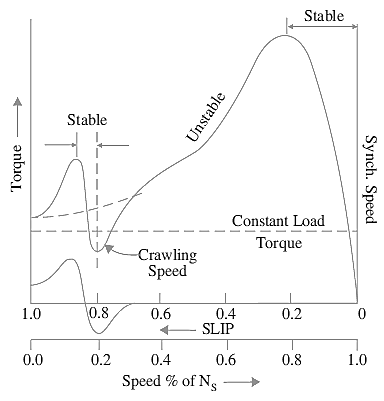 Now, the 5th harmonic currents have a phase difference of 5 × 1200 = 6000 = − 1200 in three stator windings. The revolving field, set up by them, rotates in the reverse direction at Ns / 5. The forward speed of the rotor corresponds to a slip greater than 100%. The small amount of 5th harmonic reverse torque produces a braking action and may be neglected.

If we neglect all higher harmonics, the resultant torque can be taken as equal to the sum of the fundamental torque and the 7th harmonic torque, as shown in Fig. 1. It is seen that the 7th harmonic torque reaches its maximum positive value just before 1/7th synchronous speed Ns, beyond which it becomes negative in value.

Consequently, the resultant torque characteristic shows a dip which may become very pronounced with certain slot combinations. If the mechanical load on the shaft involves a constant load torque, it is possible that the torque developed by the motor may fall below this load torque. When this happens, the motor will not accelerate upto its normal speed but will remain running at a speed, which is nearly 1/7th of its full-speed. This is referred to as crawling of the motor.