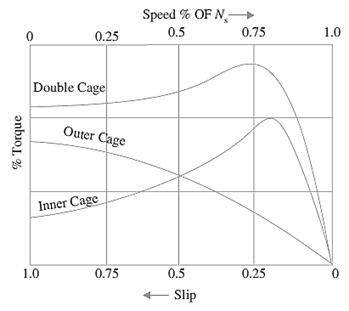 The main disadvantage of a squirrel-cage motor is its poor starting torque, because of its low rotor resistance. The starting torque could be increased by having a cage of high resistance, but then the motor will have poor efficiency under normal running conditions (because there will be more rotor Cu losses). The difficulty with a cage motor is that its cage is permanently short-circuited, so no external resistance can be introduced temporarily in its rotor circuit during starting period.

Many efforts have been made to build a squirrel-cage motor which should have a high starting torque without sacrificing its electrical efficiency, under normal running conditions. The result is a motor, due to Boucheort, which has two independent cages on the same rotor, one inside the other.

At starting and at large slip values, frequency of induced e.m.f in the rotor is high. So the reactance of the inner cage (= 2π f L) and therefore, its impedance are both high. Hence, very little current flows in it. Most of the starting current is confined to outer cage, despite its high resistance. Hence, the motor develops a high starting torque due to high-resistance outer cage. Double squirrel-cage motor is shown in Fig. 2.

As the speed increases, the frequency of the rotor e.m.f. decreases, so that the reactance and hence the impedance of inner cage decreases and becomes very small, under normal running conditions. Most of the current then flows through it and hence it develops the greater part of the motor torque. In fact, when speed is normal, frequency of rotor e.m.f. is so small that the reactance of both cages is practically negligible.

The current is carried by two cages in parallel, giving a low combined resistance. Hence, it has been made possible to construct a single machine, which has a good starting torque with reasonable starting current and which maintains high efficiency and good speed regulation, under normal operating conditions. The torque-speed characteristic of a double cage motor may be approximately taken to be the sum of two motors, one having a high-resistance rotor and the other a low-resistance one (Fig. 3). Such motors are particularly useful where frequent starting under heavy loads is required.