To understand space harmonics, it is necessary to consider MMF/flux production in the machine. It may not be out of place to recall once again that in all our foregoing analysis we have assumed that both air-gap mmf and flux are sinusoidally distributed in space.

Let us consider a single full-pitched coil excited by a sinusoidal voltage. The current flowing through it is sinusoidal and hence the time variation of the mmf produced by it is sinusoidal. But if we travel around the span of the coil, the MMF variation that we would encounter is square. It is the amplitude of this square wave that varies sinusoidally in time. The behaviour is depicted diagrammatically in fig. 1. Let one more coil be connected in series to this, which is spatially displaced by the slot angle. This is shown in fig. 2.

The same current passes through both and hence the mmf pattern generated by both would vary in tandem. However, they will be displaced by a slot angle as far as spatial distribution is concerned. The resulting situation is also shown in fig. 2 at a particular time instant. It can be seen that the resultant mmf waveform a non-sinusoidal function of the space angle θ. The harmonics are functions of the space angle. These are called space harmonics. Let us consider the effects of these.

Let the net flux waveform as a function of angle at an instant of time when unit current flows in the coils be described by f(θ). Clearly f(θ) is a periodic function of θ with a period equal to 2π. Therefore one may express this as a fourier series. If fA(θ) is the distribution function for phase A, 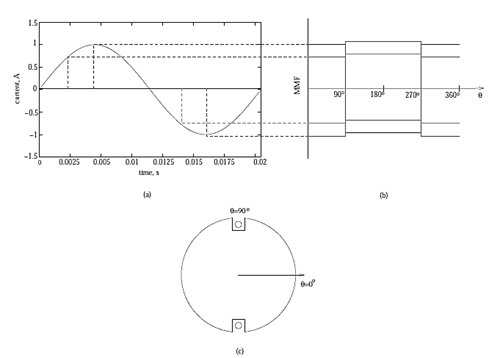