principle of operation of induction generator 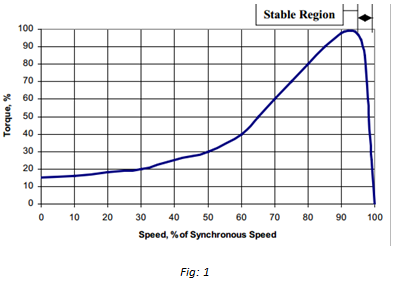 Figure 1 shows the speed torque characteristics of an induction motor operating from a constant frequency power source. Most readers are familiar with this characteristic of the induction motor operation. The operation of the induction motor occurs in a stable manner in the region of the speed torque curve indicated in Figure 1. The torque output as well as the power delivered by the motor varies as the motor speed changes. At synchronous speed no power is delivered at all. The difference between the synchronous speed and the operating speed is called the slip. The output torque and power vary linearly with the slip. 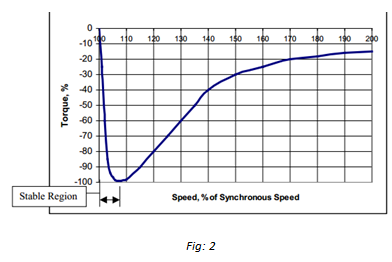 If the induction motor is driven to a speed higher than the synchronous speed, the speed torque curve reverses as shown in Figure 2. In the stable region of this curve, electric power is generated utilizing the mechanical input power from the prime mover. Once again the generated power is a function of the slip, and varies with the slip itself.

In the generator mode, if the slip is controlled in accordance with the load requirements, the induction generator will deliver the necessary power. It must be remembered that the synchronous speed is a function of the electrical frequency applied to the generator terminals. On the other hand, the operating shaft speed is determined by the prime mover. Therefore to generate power, the electrical frequency must be adjusted as the changes in the load and the prime mover speed occur.

i) Adjust the electrical frequency to produce the slip corresponding to the load requirement.

ii) Adjust the magnitude of the excitation current to provide the desirable bus voltage.

Figure 3 depicts the region of generator mode operation for a typical induction generator. A number of torque speed characteristic curves in the stable region of operation are shown to explain the operation. As an example, consider the situation when the prime mover is at the nominal or 100% speed. The electrical frequency must be adjusted to cater for load changes from 0 to 100% of the load. If a vertical line is drawn along the speed of 100%, it can be observed that the electrical frequency must be changed from 100% at no load to about 95% at full load if the prime mover speed is held at 100%.