Principle of operation of induction motor

Consider a portion of 3-phase induction motor as shown in Fig. The operation of the motor can be explained as under: 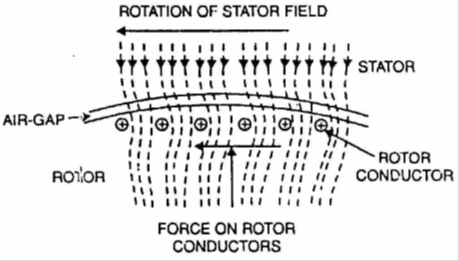 (i) When 3-phase stator winding is energized from a 3-phase supply, a rotating magnetic field is set up which rotates round the stator at synchronous speed Ns (= 120 f/P).

(iv) The fact that rotor is urged to follow the stator field (i.e., rotor moves in the direction of stator field) can be explained by Lenz’s law. According to this law, the direction of rotor currents will be such that they tend to oppose the cause producing them. Now, the cause producing the rotor currents is the relative speed between the rotating field and the stationary rotor conductors. Hence to reduce this relative speed, the rotor starts running in the same direction as that of stator field and tries to catch it.