The motor torque under running conditions is given by; 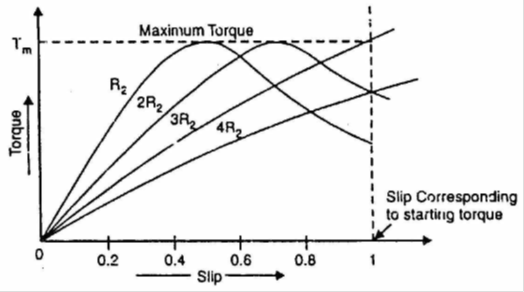 The following points may be noted carefully:

(ii) At normal speed, slip is small so that s X2 is negligible as compared to R2.

Hence torque slip curve is a straight line from zero slip to a slip that corresponds to full-load.

(iii) As slip increases beyond full-load slip, the torque increases and becomes maximum at s = R2/X2. This maximum torque in an induction motor is called pull-out torque or break-down torque. Its value is at least twice the full-load value when the motor is operated at rated voltage and frequency.

(iv) To obtain maximum torque, the term s2 X22 increases very rapidly so that R22 may be neglected as compared to s2 X22 .

Thus the torque is now inversely proportional to slip. Hence torque-slip curve is a rectangular hyperbola.