by graphical method to get

, put the tail of

on the head of

.Then we draw a vector from the tail of

to the head of

. That vector represents the resultant

(Figure 4). I leave it as an exercise for you to show that

. In other words, show that vector addition is commutative. 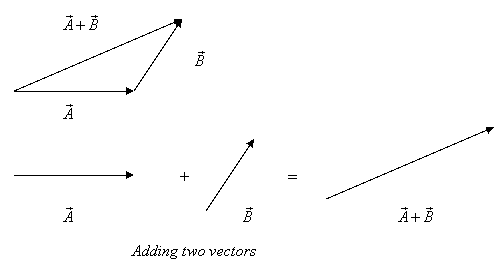 Let us try to understand that it is indeed meaningful to add two vectors like this. Imagine the following situations. Suppose when we hit a ball, we can give it velocity

. Now imagine a ball is moving with velocity

and you hit it an additional velocity

. From experience you know that the ball will now start moving in a direction different from that of

Now if we add a vector

to itself, it is clear from the graphical method that its magnitude is going to be 2 times the magnitude of

. This is equivalent to multiplying the vector

by 2. Similarly if 3 vectors are added we get the resultant

. So we have now got the idea of multiplying a vector by a number n . If simply means: add the vector n times and this results in giving a vector in the same direction with a magnitude that n times larger.

You may now ask: can I multiply by a negative number? The answer is yes. Let us see what happens, for example, when I multiply a vector

represents a vector to the right,

would represent a vector in the direction opposite i.e. to the left. It is now easy to understand what does the vector

represent? It is a vector of the same magnitude as that of

but in the direction opposite to it (Figure 2). Having defined

, it is now easy to see what is the vector

? It is a vector of magnitude

in the direction opposite to

, it is now straightforward to subtract one vector from the other. To subtract a vector 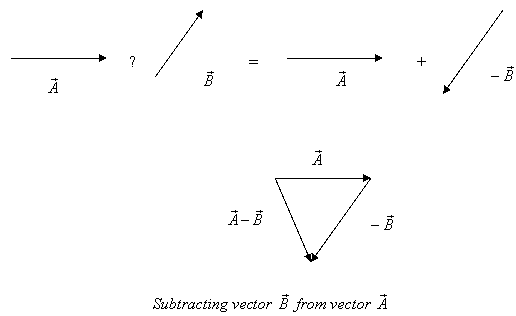 is not equal to

. We now solve a couple of examples.