Equality of Vectors: Since a vector is defined by the direction and magnitude, two vectors are equal if they have the same magnitude and direction. Thus in figure 1 vector

is equal to vector

and but not equal to vector

although all of them have the same magnitude.

Thus we conclude that any two vectors which have the same magnitude and are parallel to each other are equal. If they are not parallel then they cannot be equal no matter what their magnitude.

In physical situations even two equal vectors may produce different effects depending on where they are located. For example take the force

applied on a disc. If applied on the rim it rotates the wheel at a speed different from when it is applied to a point nearer to the center. Thus although it is the same force, applied at different points it produces different effects. On the other hand, imagine a thin rope wrapped on a wheel and being pulled out horizontally from the top. On the rope no matter where the force is applied, the effect is the same. Similarly we may push the wheel by applying the same force at thee end of a stick with same result (see figure 2). 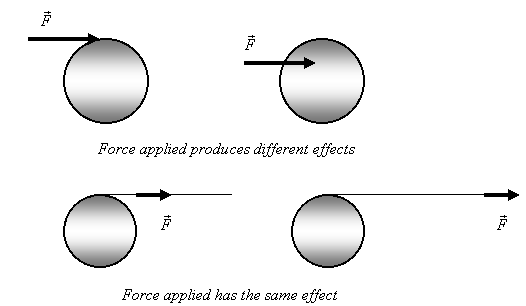