Forces and couples generated by various elements: The simplest element is a string that can apply a tension. However a string can only pull by the tension generated in it but not push. For example, a string holding a weight W will develop a tension T = W in it so that the net force on the weight is a tension T pulling the weight up and weight W pulling it down. Thus if the weight is in equilibrium, T = W . This is shown in figure 1. 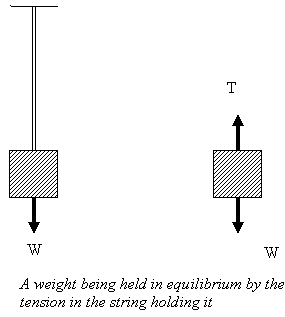 The second kind of force that is applied when two elements come in contact is that applied by a surface. A smooth surface always applies a force normal to itself. The forces on a rod and on a box applied by the surface are shown in figure 2. Thus as far as the equilibrium is concerned, for an object on a smooth surface, the surface is equivalent to a force normal to it. 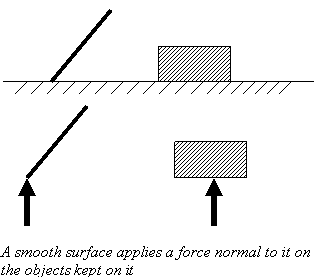 On the other hand if the surface is not smooth, it is then capable of applying a force along the surface also. This force is due to friction.