Lamis theorem: Friction: As the body is acted by three non-parallel forces, the forces must be coplanar and concurrent. The relation between the forces can be found by Lami's theorem. The following figure shows the three forces meeting at a common point: 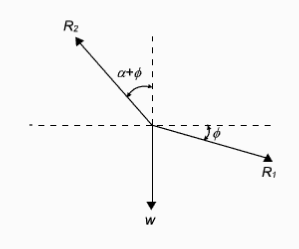 Now, let us make the free body diagram of the wedge. Three forces acting on the wedge are shown. R1and R2 are the resultants of normal and surface forces. 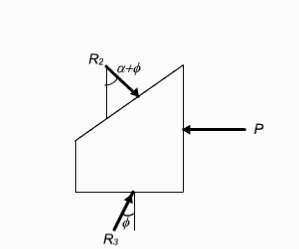 Hence three forces meet at a point as shown below.

The Lami's theorem gives us:

This analysis pertains to load being lifted by the wedge. If the load is lowered, the direction of friction forces and P will reverse. The analysis is similar, except that f will be replaced by - Φ. For ,α<2Φ  P will be positive. That is some force will be needed to lower the load. In other words, without applied P, the load W will not get lowered and the wedge is called self-locking.