Resultant of Systems of Coplanar Forces

Resultant of Systems of Coplanar Forces: Consider a rigid body that is subjected to a general system of coplanar forces (Fig. 1). To investigate how this system can be reduced to a simpler system, a reference point A is chosen and the action lines of the forces are moved without changing their 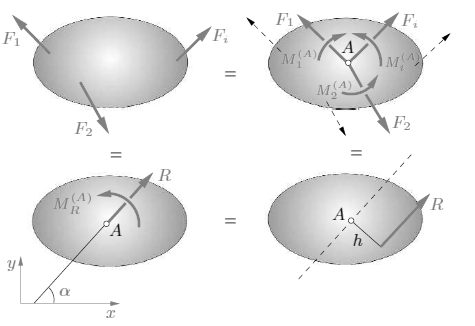 directions until they pass through A. To avoid changing the effect of the forces on the body, the respective moments of the forces about A must be introduced. Hence, the given general system of forces is replaced by a system of concurrent forces and a system of moments. These two systems can be reduced to a resultant force R with the components Rx and Ry and a resultant moment M(A) R .

The system of the resultant R (action line through A) and the moment MR(A) may be further simplified. It is equivalent to the single force R alone if the action line is moved appropriately. The perpendicular distance h (Fig. 1) must be chosen in such a way that the momentMR(A) equals hR, i.e., hR =MR(A) , which yields

If MR(A) = 0 and R≠ 0, Equation (2) gives h = 0. In this case the action line of the resultant of the general system of forces passes through A. On the other hand, if R = 0 and MR(A) = 0, a further reduction is not possible: the system of forces is reduced to only a moment (i.e., a couple), which is independent of the choice of the reference point. Equations (1) to (2) can be used to calculate the magnitude and direction of the resultant as well as the location of its action
line.