Beams under Concentrated Loads:In order to determine the stress resultants V and M we choose a coordinate system and imagine the beam cut at an arbitrary position x. The stress resultants are represented with their positive directions in the free-body diagrams; they can be computed from the equilibrium conditions for either portion of the beam. Theresults of the analysis are usually presented in a shear-force and a bending-moment diagram. As an alternative to this elementary method, there exists another method to determine the stress resultants. It is based on the differential relationships between the load. For the sake of simplicity, we restrict the discussion in the following to beams that are subjected to concentrated loads and to couples. As an example we consider the simply supported beam shown in Fig.1a. 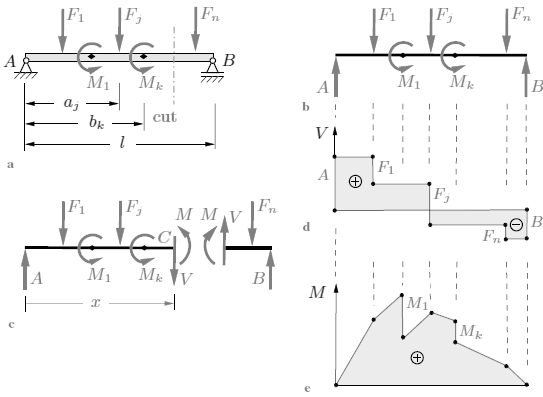 The support reactions are obtained from the equilibrium conditions for the free-body diagram of the beam as a whole (Fig. 1b):

Now, let us imagine the beam cut at an arbitrary position x (Fig. 1c). Since the normal force is equal to zero, it is not shown in the free-body diagram. The equilibrium conditions for the left 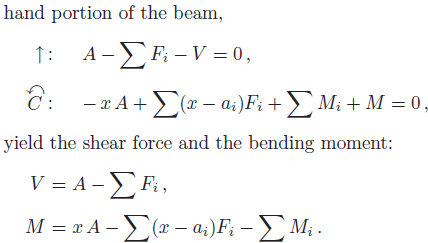 The summations in (1) and (2) include only the forces Fi and the couples Mi acting at the left-hand portion of the beam. The stress resultants can also be computed with the equilibrium conditions for the right-hand part of the beam. Usually, the part of the beam that allows for a simpler calculation of the results is
chosen.
The shear-force diagram is shown in Fig. 1d. According to (1), the shear force is piecewise constant. The shear-force diagram has jump discontinuities at the points of application of the concentrated forces Fi. The magnitude of a jump is equal to the magnitude of the respective force. According to (2), the bending moment (Fig. 1e) is a piecewise linear function of the coordinate x. The diagram displays slope discontinuities (kinks) at the points of application of the forces Fi and jump discontinuities (magnitudes Mi) at the points of application of the external couples Mi. The supports A and B (hinge and roller support) cannot exert a moment. Therefore, the bending moment is zero at the end-points of a simply supported beam.

A relationship exists between the bending moment and the shear force. If the derivative of (7.2) with respect to x is calculated and (1) is applied, we obtain

The slopes of the straight lines in the bending-moment diagram are thus given by the corresponding values of the shear force.