Conservation of angular momentum: If the resultant moment about a fixed point O of all forces acting on a particle is zero during an interval of time, then its angular mometum remains constant.

Also the total angular momentum for the system of the two particles remains constant during the interval.

A particle of mass m tied at the end of an extensible string is rotated at rad/sec along a circle of r radius over a smooth horizontal table top. The string is pulled down through a slot at the center of the table top at a speed V. Calculate the speed of the particle when it reaches r/2 from the center. 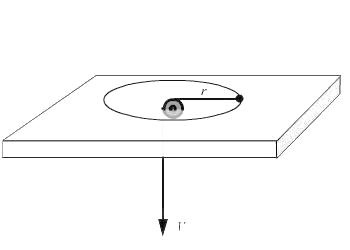 where vr and are the radial and tangential velocities of the particle respectively. Since direction of radial velocity and position vector coincide, the above expression reduces

Putting, in the above expression, we get

Thus, for two different radii of the path of particle,

Therefore, the angular velocity of the particle at the radius of r/2 is 4

The resultant speed of the particle is