We have seen that if a body is rotating about fixed point not passing through its mass center, then the force system on the body may be reprsented by two forces passing through its center of mass in the normal and tangential direction, together with a moment . The moment may be eliminated if the line of action of tangential force is shifted to pass from the point Q instead of G, as shown in the figure below. This point Q is then called center of percussion.

Let me make it clear (even at the cost of repeatation!) in the following lines: For a general planar motion, we have these equations of motion: 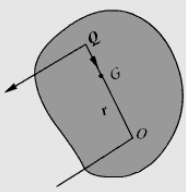 The free body diagram and equivalent kinetic diagram are shown beside: 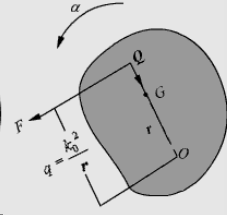 If a tangential force F passes through G, then,

Thus, Since the force F is passing through the G, the moment of that force is about G zero. If it is so, from where do we get the moment ? From the reaction at the pin, of course.

Now, suppose a force F is applied at a point Q, which is at a distance of from O. Here k0 is the radius of gyration about O i.e. the moment of inertia about O is given by Now

Hence, the tangential acceleration is

Thus, the force at O is zero. Hence, if a force is applied at the center of percussion, no reaction is developed at the fixed support.

The sum of the moments of all forces about the center of percussion is zero.