When the mass of each particle remains constant, the above expression may be written as

If rG is the position vector of mass center and m is the total mass, then

,where VG  is the velocity of the mass center.

This is true for rigid as well as non rigid body. Differentiating the above expression with respect to the time

Integrating the above relation between t1 and t2 ,

Note that all external forces exert impulses, whether they do work or not.

Angular momentum is defined as the moment of linear momentum.

For a system of particles, the angular momentum HG (about the mass center) is given by

where is the position vector of the particle about the center of mass as shown in the figure. 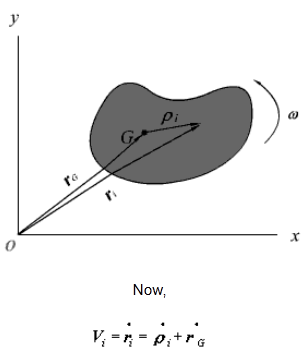