Oblique Central Impact: The figure shows 2 particles which impact in an oblique manner. Here spherical particles of massm1 and m2 have initial velocities v1 and v2 in the same plane and approach each other on a collision course. The directions of the velocity vectors are measured from the direction tangent to the contacting surfaces. Thus, the initial velocity components along the t and n-axes are . Note that (v1)n is a negative quantity for the particular coordinate system and initial velocities shown. Shades of 3 different situations are shown below.

(1) Momentum of the system in the n-direction. This gives, 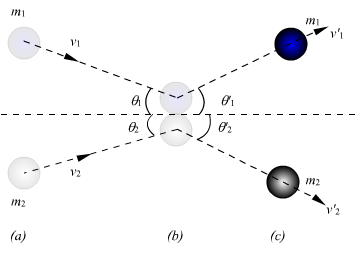 Once four final velocity components are found, the angles of the figure may be easily determined.

An example:Two ball of the same size and mass collide with the velocities of approach shown. For a coefficient restitution of 0.8, what are the final velocities after they part?

Applying the conservation of moment, along the line of impact,