Plane Kinematics of rigid bodies: A rigid body executes plane motion when all parts of the body move in parallel planes.We generally consider the plane of motion to be the plane that contains the mass center and we treat the body as a thin slab with motion confined to the plane of the slab. The plane motion of a rigid body may be divided into several categories:

In curvillinear transition , all points move on congruent curves.

Notice that in translation, the motion of the body is completely specified by the motion of any point in the body, since all point have the same motion. The velocity of the translating body can vary with time in both direction and magnitude.

Rotation: Rotation about a fixed axis is the angular motion about the axis. Play the following animation for obtaining the rotation of the rod about the axis passing through point O and perpendicular to the plane.


General plane motion of rigid body is a combination of transition and rotation. 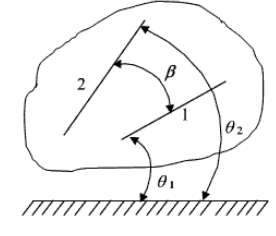 Supposing there are two straight lines, 1 and 2 in the body, which are at an angle of b with respect to each other. At an instant of time, the lines make an angle of

with a fixed horizontal line, which is taken as a reference.

Upon differentiation with respect to time,