Bending Of Composite or Flitched Beams

Bending Of Composite or Flitched Beams: A composite beam is defined as the one which is constructed from a combination of materials. If such a beam is formed by rigidly bolting together two timber joists and a reinforcing steel plate, then it is termed as a flitched beam.

The bending theory is valid when a constant value of Young's modulus applies across a section it cannot be used directly to solve the composite-beam problems where two different materials, and therefore different values of E, exists. The method of solution in such a case is to replace one of the materials by an equivalent section of the other. 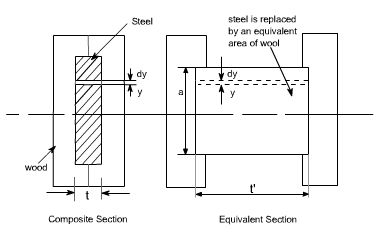 Consider, a beam as shown in figure in which a steel plate is held centrally in an appropriate recess/pocket between two blocks of wood .Here it is convenient to replace the steel by an equivalent area of wood, retaining the same bending strength. i.e. the moment at any section must be the same in the equivalent section as in the original section so that the force at any given dy in the equivalent beam must be equal to that at the strip it replaces. Hence to replace a steel strip by an equivalent wooden strip the thickness must be multiplied by the modular ratio E/E'.

The equivalent section is then one of the same materials throughout and the simple bending theory applies. The stress in the wooden part of the original beam is found directly and that in the steel found from the value at the same point in the equivalent material as follows by utilizing the given relations.

The above procedure of course is not limited to the two materials treated above but applies well for any material combination. The wood and steel flitched beam was nearly chosen as a just for the sake of convenience.