Concept of strain: if a bar is subjected to a direct load, and hence a stress the bar will change in length. If the bar has an original length L and changes by an amount dL, the strain produce is defined as follows:

Strain is thus, a measure of the deformation of the material and is a nondimensional Quantity i.e. it has no units. It is simply a ratio of two quantities with the same unit. 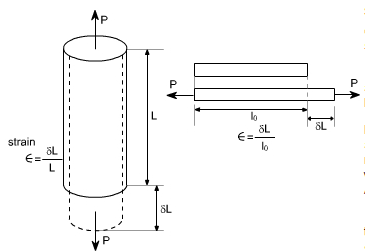 Since in practice, the extensions of materials under load are very very small, it is often convenient to measure the strain in the form of strain x 10-6 i.e. micro strain, when the symbol used becomes m Î.

Sign convention for strain: Tensile strains are positive whereas compressive strains are negative. The strain defined earlier was known as linear strain or normal strain or the longitudinal strain now let us define the shear strain.

Definition: An element which is subjected to a shear stress experiences a deformation as shown in the figure below. The tangent of the angle through which two adjacent sides rotate relative to their initial position is termed shear strain. In many cases the angle is very small and the angle it self is used, ( in radians ), instead of tangent, so that g = Ð AOB - Ð A'OB' = f

Shear strain: As we know that the shear stresses acts along the surface. The action of the stresses is to produce or being about the deformation in the body consider the distortion produced b shear sheer stress on an element or rectangular block 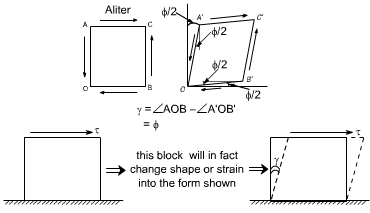 This shear strain or slide is f and can be defined as the change in right angle. or The angle of deformation g is then termed as the shear strain. Shear strain is measured in radians & hence is non – dimensional i.e. it has no unit.So we have two types of strain i.e. normal stress & shear stresses.

A material is said to be elastic if it returns to its original, unloaded dimensions when load is removed.

Modulus of elasticity : Within the elastic limits of materials i.e. within the limits in which Hook's law applies, it has been shown that

The value of Young's modulus E is generally assumed to be the same in tension or compression and for most engineering material has high, numerical value of the order of 200 GPa

Poisson's ratio: If a bar is subjected to a longitudinal stress there will be a strain in this direction equal to s / E . There will also be a strain in all directions at right angles to s . The final shape being shown by the dotted lines.

For most engineering materials the value of m his between 0.25 and 0.33.