Concept of Stress:Let us introduce the concept of stress as we know that the main problem of engineering mechanics of material is the investigation of the internal resistance of the body, i.e. the nature of forces set up within a body to balance the effect of the externally applied forces.

As we know that in mechanics of deformable solids, externally applied forces acts on a body and body suffers a deformation. From equilibrium point of view, this action should be opposed or reacted by internal forces which are set up within the particles of material due to cohesion. 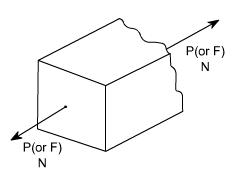 Now stress is defined as the force intensity or force per unit area. Here we use a symbol s to represent the stress.

Where A is the area of the X – section

Here we are using an assumption that the total force or total load carried by the rectangular bar is uniformly distributed over its cross – section.

But the stress distributions may be for from uniform, with local regions of high stress known as stress concentrations.

If the force carried by a component is not uniformly distributed over its cross – sectional area, A, we must consider a small area, ‘dA' which carries a small load dP, of the total force ‘P', Then definition of stress is

As a particular stress generally holds true only at a point, therefore it is defined mathematically as