The earth is a constant recipient of an enormous flux of solar radiation as well as considerable in fall of the cosmic debris that also arrives periodically in huge, catastrophe-inducing encounters with other space bodies, particularly with massive comets and asteroids. Nothing else comes in, and the planet's relatively powerful gravity prevents anything substantial from leaving. Consequently, life on the earth is predicated on incessant cycling of water and materials that are needed to assemble living bodies as well as to provide suitable environmental conditions for their evolution. These cycles are energized by two distinct sources: Whereas the water cycle and the circulations of carbon, nitrogen, and sulfur, the three key life-building elements, are powered by solar radiation, the planet's grand tectonic cycle is driven by the earth's heat. For hundreds of thousands of years, our species had no discernible large-scale effect on these natural processes, but during the 20th century anthropogenic interferences in global biosphere cycles became a matter of scientific concern and an increasingly important, and controversial, topic of public policy debates.

Two massive material cycles would be taking place even on a lifeless Earth:

1.Slow formation and recycling of the planet's thin crust and

2. Evaporation, condensation, and runoff of water.

As weathering breaks down exposed rocks, their constituent minerals are transported by wind in terrigenic dust and in flowing water as ionic solutions or suspended matter. Their journey eventually ends in the ocean, and the deposited materials are either drawn into the mantle to reemerge in new configurations 107–108 years later along the ocean ridges or in volcanic hot spots or they resurface as a result of tectonic movements as new mountain ranges. This grand sedimentary–tectonic sequence recycles not just all trace metals that are indispensable in small amounts for both auto- and heterotrophic metabolism but also phosphorus, one of the three essential plant macronutrients. On human timescale (101 years), we can directly observe only a minuscule segment of the geotectonic weathering cycle and measure its rates mostly as one way ocean-ward fluxes of water-borne compounds. Human actions are of no consequence as far as the geotectonic processes are concerned, but they have greatly accelerated the rate of weathering due to deforestation, overgrazing of pastures, and improper crop cultivation. Incredibly, the annual rate of this unintended earth movement, 50–80 billion metric tons (Gt), is now considerably higher than the aggregate rate of global weathering before the rise of agriculture (no more than 30 Gt/year). In addition, we act as intentional geomorphic agents as we extract, displace, and process crustal minerals, mostly sand, stone, and fossil fuels. The aggregate mass moved annually by these activities is also larger than the natural preagricultural weathering rate. Our activities have also profoundly affected both the quantity and the quality of water cycled on local and regional scales, but they cannot directly change the global water flux driven predominantly by the evaporation from the ocean. However, a major consequence of a rapid anthropogenic global warming would be an eventual intensification of the water cycle. In contrast to these two solely, or overwhelmingly, inanimate cycles, global circulations of carbon, nitrogen, and sulfur are to a large extent driven or mediated by living organisms, largely by bacteria, archaea, and plants. Another characteristic that these cycles have in common is their relatively modest claim on the planet's energy flows. Photosynthesis, carbon cycle's key terrestrial flux, requires only a tiny share of incident solar radiation, and the cycling of nitrogen and sulfur involves much smaller masses of materials and hence these two cycles need even less energy for their operation: Their indispensability for Earth's life is in renewing the availability of elements that impart specific qualities to living molecules rather than in moving large quantities of materials. Similarly, only a small fraction of the planet's geothermal heat is needed to power the processes of global geotectonic. Although the basic energetic of all these cycles is fairly well-known, numerous particulars remain elusive, including not only specific details, whose elaboration would not change the fundamental understanding of how these cycles operate, but also major uncertainties regarding the extent and consequences of human interference in the flows of the three doubly mobile elements (carbon, nitrogen, and sulfur), whose compounds are transported while dissolved in water as well as relatively long-lived atmospheric gases. For millennia these interventions were discernible only on local and regional scales, but during the 20th century their impacts increased to such an extent that the effects of these interferences now present some historically unprecedented challenges even in global terms. 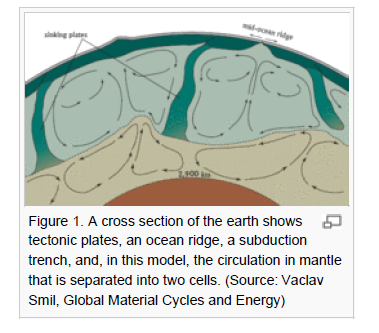