Functions with Multiple Singularities: It turns out to be useful, especially in evaluating various types of integrals, to consider functions that have more than one “singularity.” We want to consider the following general question:

related to the behavior of f near the points P1, P2, . . . , Pn. The first step is to restrict our attention to open sets U for which

To see this, first note that the integral over

may be broken up into integrals over “smaller curves,” each of which surrounds just one pole. See Figure below. Then each such integral reduces, by deformation of curves, to an integral around a circle. Thus the result is a straightforward calculation.

Figure of Reduction to simple curve: 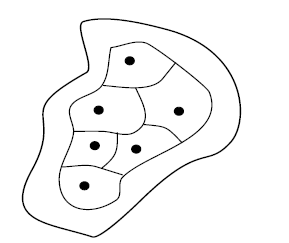 The result just stated is used so often that some special terminology is commonly used to simplify its statement. First, the number Rj is usually called the residue of f at Pj , written Resf (Pj). Note that this terminology of considering the number Rj attached to the point Pj makes sense because Resf (Pj) is completely determined by knowing f in a small neighborhood of Pj . In particular, the value of the residue does not depend on what the other points Pk, k ≠ j, might be, or on how f behaves near those points.