Sequences of Holomorphic Functions and their Derivatives

Sequences of Holomorphic Functions and their Derivatives:

E . The key point is that the degree of closeness of gj (x) to g (x) is independent of x

Let fj : U → C, j = 1, 2, 3 . . . , be a sequence of holomorphic functions on an open set U in C. Suppose that there is a function f : U → C such that, for each compact subset E (a compact set is one that is closed and bounded of U, the restricted sequence f j|E converges uniformly to f |E. Then f is holomorphic on U. [In particular, f

uniformly on compact sets.1 The proof is immediate from, which we derived from the Cauchy integral formula, for the derivative of a holomorphic function.

Zero Set of a Holomorphic Function:

Let f be a holomorphic function. If f is not identically zero, then it turns out that f cannot vanish at too many points. This once again bears out the dictum that holomorphic functions are a lot like polynomials. To give this concept a precise formulation, we need to recall the topological notion of connectedness.

Discreteness of the Zeros of a Holomorphic Function:

Let us formulate the result in topological terms. We recall that a point z0 is said to be an accumulation point of a set

zj = z0. Then the theorem is equivalent to the statement: If f : U → C is a holomorphic function on a connected open set U and if Z = {z

There is still more terminology concerning the zero set of a holomorphic function in the above equations. A set S is said to be discrete if for each s

S = { s }. People also say, in a slight abuse of language, that a discrete set has points that are “isolated” or that S contains only “isolated points.” The result in equations thus asserts that if f is a non-constant holomorphic function on a connected open set, then its zero set is discrete or, less formally, the zeros of f are isolated. It is important to realize that the result in equations does not rule out the possibility that the zero set of f can have accumulation points in C\U; in particular, a non-constant holomorphic function on an open set U can indeed have zeros accumulating at a point of ∂U. Consider, for instance, the function f (z) = sin(1/[1−z]) on the unit disc. The zeros of this f include {1−1/[ j π]}, and these accumulate at the boundary point 1.

Figure of Zeros accumulating at a boundary point: 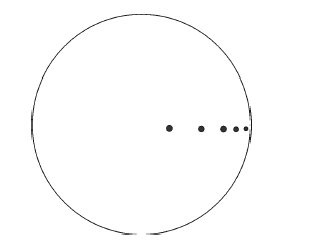