There are various methods of determining correlation in two variables. Here we discuss only following methods:

Karl Pearson, a great biometrician and statistician suggested in 1890, a mathematical method for measuring the magnitude of relationship between two variables. It gives the most widely used formula, called Pearson’s coefficient of correlation and denoted by r. This formula is also called product moment correlation coefficient. Karl Pearson’s Correlation Coefficient: 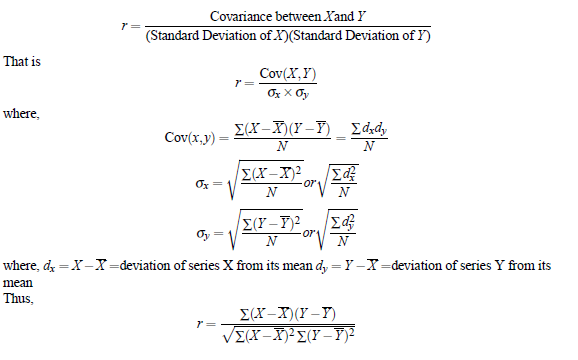 1. It is an ideal measure of correlation and is independent of the units of X and Y.

2. It is independent of change of origin and scale.

3. It is based on all the observations.

(a) r = −1, when there is a perfect negative correlation

(c) r = 1, when there is a perfect positive correlation.

5. It does not tell any thing about cause and effect relationship.

6. It is some how difficult to calculate.

7. It requires some interpretation.

The Karl Pearson’s coefficient of correlation is based on the following three assumptions:

1. In each of the series a large number of independent causes are operating so as to produce normal distribution.

2. The forces so operated has a relationship of cause and effect.

3. The relationship between two variables is linear.