Current ratings of a thyristor

Heating of the resistive elements of a thyristor such as metallic joints, leads and interfaces depends on the forward RMS current Irms. RMS current rating is used as an upper limit for dc as well as pulsed current waveforms. This limit should not be exceeded on a continuous basis.

Maximum average current (Iav): It is the maximum allowable average value of the forward current such that

i. Peak junction temperature is not exceeded

Manufacturers usually provide the “forward average current derating characteristics” which shows Iav as a function of the case temperature (Tc ) with the current conduction angle φ as a parameter. 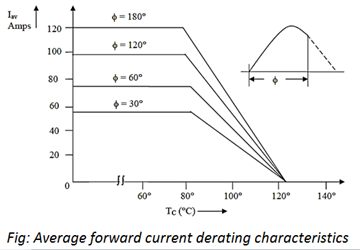 It specifies the maximum allowable non repetitive current the device can withstand. The device is assumed to be operating under rated blocking voltage, forward current and junction temperation before the surge current occurs. Following the surge the device should be disconnected from the circuit and allowed to cool down. Surge currents are assumed to be sine waves of power frequency with a minimum duration of ½ cycles. Manufacturers provide at least three different surge current ratings for different durations.

This rating in terms of A2S is a measure of the energy the device can absorb for a short time (less than one half cycle of power frequency). This rating is used in the choice of the protective fuse connected in series with the device.

After Turn ON the gate pulse must be maintained until the anode current reaches this level. Otherwise, upon removal of gate pulse, the device will turn off.

The anode current must be reduced below this value to turn off the thyristor.

Usually specified as a function of the instantaneous forward current at a given junction temperature.

Specified as a function of the average forward current (Iav) for different conduction angles. The current wave form is assumed to be half cycle sine wave (or square wave) for power frequency.

In the graph shown we get,