Turn on Switching Characteristics of thyristor 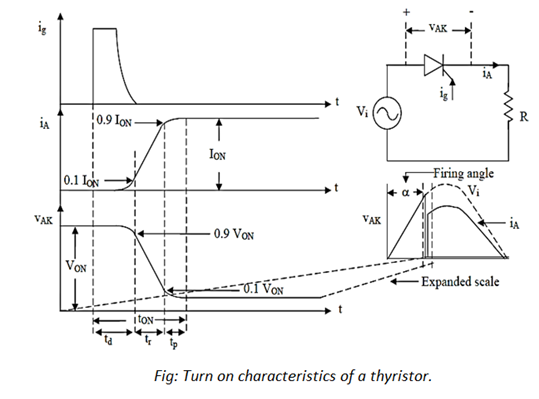 After switching on the gate current the thyristor will start to conduct over the portion of the cathode which is closest to the gate. This conducting area starts spreading at a finite speed until the entire cathode region becomes conductive. Time taken by this process constitute the turn on delay time of a thyristor. It is measured from the instant of application of the gate current to the instant when the anode current rises to 10% of its final value (or VAK falls to 90% of its initial value). Typical value of “td” is a few micro seconds.

For a resistive load, “rise time” is the time taken by the anode current to rise from 10% of its final value to 90% of its final value. At the same time the voltage VAK falls from 90% of its initial value to 10% of its initial value. However, current rise and voltage fall characteristics are strongly influenced by the type of the load. For inductive load the voltage falls faster than the current. While for a capacitive load VAK falls rapidly in the beginning. However, as the current increases, rate of change of anode voltage substantially decreases.

If the anode current rises too fast it tends to remain confined in a small area. This can give rise to local “hot spots” and damage the device. Therefore, it is necessary to limit the rate of rise of the