The Duty Ratio (k) for the limit of continuous conduction: 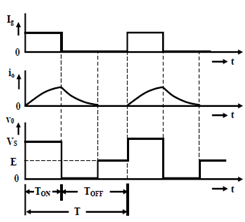 The average value of the output current: