White cast iron: The white color is due to the fact that the carbon is this iron is in combined form as iron carbide which is commonly specified as cementite. It is the hardest constituent of iron. It is produced in cupola furnace by refining or pig iron. The white cast iron may be produced by
casting against metal chills or by regulating analysis. The chills are used when a hard and wear resistance surface is desired for products such as for wheels, rolls crushing jaw, crusher plates. The chemical composition of white cast iron is given as under.
C = 3.2 to 3.6%
Si = 0.4 to 1.1 %
Mg = 0.1 to 0.4%
P = less than 0.3%
S = less than 0.2%
Fe = Remaining
Properties

Ductile cast iron: When small quantities of magnesium or cerium is added to cast iron, then graphite content is converted into nodular or spheroidal form and it is well dispersed throughout the material. The resulting structure possesses properties more like cast steel than like the other
grades of cast iron. A typical structure of spheroidal cast iron is shown in Fig. 4.2. Graphite is in spheroidal form instead of in flaky form. Its structure may be modified by alloys or heat treatment, as in steel to produce austenite, acicular, martensite, pearlite, and ferrite structure.
Compositions of ductile cast iron are as follows:
Carbon = 3.2 to 4.2%
Silicon = 1.0 to 4.0 %
Magnesium = 0.1 to 0.8%
Nickel = 0.0 to 3.5%
Manganese = 0.5 to 0.1%
Iron = Remaining 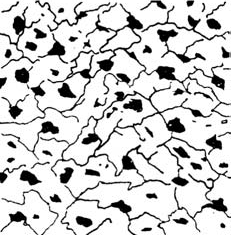 Silicon is also used as an alloying element since it has no effect on size and distribution\ of carbon content. The magnesium controls the formation of graphite. But it has little influence on the matrix structure. Nickel and manganese impart strength and ductility. Ductile cast iron has high fluidity, excellent castability, strength, high toughness, excellent wear resistance, pressure tightness, weldability and higher machinability in comparison to grey cast iron.