Wrought Iron: Wrought iron is the assumed approximately as purest iron which possesses at least 99.5% iron. It contains a large number of minute threads of slag lying parallel to each other, thereby giving the metal a fibrous appearance when broken. It is said as a mechanical mixture of very pure iron and a silicate slag. It can also be said as a ferrous material, aggregated from a solidifying mass of pasty particles of highly refined metallic iron with which a minutely and uniformly distributed quantity of slag is incorporated without subsequent fusion. This iron is produced from pig iron by re-melting it in the puddling furnace or air furnace or reverberatory furnace. The molten metal free from impurities is removed from the furnace as a pasty mass of iron and slag. The balls of this pasty mass, each about 45 to 65 kg in weight, are formed.
These balls are then mechanically worked to squeeze out the slag and to form it into some commercial shape. This iron contains practically no carbon and therefore can not be hardened.
Chemical Composition
A chemical composition range of typical wrought iron includes:
C = 0.02 – 0.03% P = 0.05 – 0.25% Si = 0.02 – 0.10%
S = 0.008 – 0.02% Mn = 0.0 – 0.02% Slag = 0.05 – 1.5%
Fe = remainder
Properties: The wrought iron can be easily shaped by hammering, pressing, forging, etc. It is never cast and it can be easily bent when cold. It is tough and it has high ductility and plasticit with which it can be forged and welded easily. Its ultimate strength can be increased considerably by cold working followed by a period of aging. It possesses a high resistance towards corrosion. It can accommodate sudden and excessive shocks loads without permanent injury. It has a high resistance towards fatigue. Its ultimate tensile strength is 2,500 kg/cm2 to 5,000 kg/cm2 and the ultimate compressive strength is 3,000 kg/cm2. It can be elongated considerably by cold working. It has high electrical conductivity. The melting point of wrought iron is about 1530°C. It has elongation 20% in 200 mm in longitudinal direction and 2–5 % in transverse direction. Its poison’s ratio is 0.30. It can be easily formed when cold, without the outer side cracking at the formed portion.
Applications: It is used for making chains, crane hooks, railway couplings, and water and steam pipes. It has application in the form of plates, sheets, bars, structural works, forging blooms and billets, rivets, and a wide range of tubular products including pipe, tubing and casing, electrical
conduit, cold drawn tubing, nipples and welding fittings, bridge railings, blast plates, drainage lines and troughs, sewer outfall lines, weir plates, sludge tanks and lines, condenser tubes, unfired heat exchangers, acid and alkali process lines, skimmer bars, diesel exhaust and air brake piping, gas collection hoods, coal equipment, cooling tower and spray pond piping.

Steels: Steel is an alloy of iron and carbon with carbon content maximum up to 1.7%. The carbon occurs in the form of iron carbide, because of its ability to increase the hardness and strength of the steel. The effect of carbon on properties of steel is given in Fig. 1 Other elements e.g. silicon, sulphur, phosphorus and manganese are also present to greater or lesser amount to import certain desired properties to it. Most of the steel produced now-a-days is plain carbon steel. Carbon steel has its properties mainly due to carbon content and does not contain more than 0.5% of silicon and 1.5% of manganese. 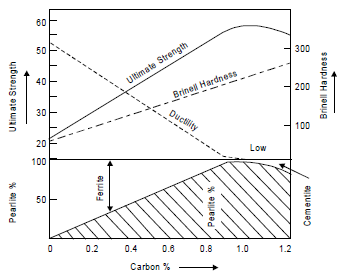 Fig. 1 Effect of carbon on properties of steel

For checking microstructure of steel, its specimen is prepared by preparing a flat mirror surface on small piece of metal through rubbing by sand papers, polishing and buffing etc. This surface is then followed by etching with a chemical solution. The chemical solution reacts with various constituents in varying degree to reveal crystal structure clearly. The revealed structure is then viewed through powerful microscope. The viewed micro structures for different steel are depicted in Fig. 2.