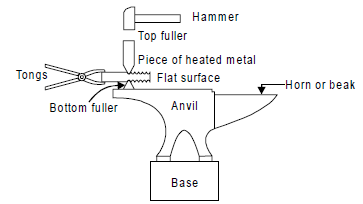 Some important hand forging operations are described as under.
(i) Drawing out: Drawing out is used to reduce the thickness of a bar and to increase its length. It may be carried out by working the metal over the horn the anvil as shown in Fig. 2, then by hammering it on the anvil face. The rounded horn of the anvil acts as a blunt edge, which forces the metal to flow lengthwise when struck by the hammer. For drawing down very heavy work, fuller may be used for drawing down a bar over the horn (round portion) of anvil.
(ii) Fullering: Fullering operation generally used in forging shop is shown in Fig.2. It involves heating the stock in the black smith hearth. Then heated stock is placed on the fuller fixed on anvil. A fuller is put over the sock and hammering is done to reduce the cross section of job at required point. 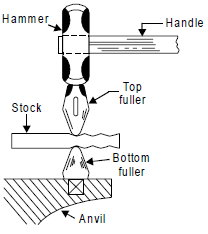 (iii) Upsetting: Upsetting is also known as jumping operation which is carried out to increase the thickness (or diameter) of a bar and to reduce its length. Generally, the increase in thickness is only local, for example, when forming a bolt head. This operation is an operation just opposite to drawing and involves increasing the cross-sectional area usually by hammering or pressing in a direction parallel to the ingot axis. The length of the ingot decreases and following the path of least resistance it spreads out. The required shape is given the ingot by spreading it between two dies. Only that portion of the bar which is to be upset is heated locally. Or, the whole bar is heated and except for the portion to be upset, the rest is quenched in water so that upset will form only on the hot portion of the bar. In one method of upsetting, the bar is held in the tong and supported vertically on the anvil. The top edge of the bar is then hammered to form the upset on the bottom hot end of the bar. For upsetting, the blow of the hammer must be in line with the bar to prevent bending of the bar.
(iv) Bending: Bending is a very commonly used forging operation in forging shop to give a turn to a metal rod or plate. It is accompanied by spreading of the metal in the inside of the bend and narrowing at outside. The simplest method of bending a piece of metal in hand forging is to support it on the anvil and to strike its free end with a hammer When bent, the metal of the workpiece thins out round bend causing weakness. This can be overcome by upsetting the bar prior to bending.
(v) Cutting:  Cutting is a main forging operation to cut out a metal rod or plate into two pieces with the help of a chisel and hammer when the metal is in red hot condition. A hot or cold cut (chisel) is used for cutting heated metal bars in a smithy shop. The hot set does not require
hardening and tempering. Its cutting edge is keener than that of a cold set. Hot sets are manufactured from a tough variety of steel in order that they may cut through relatively soft red-hot metal with ease. While cutting, it is best to cut half through the workpiece to turn it over and cut through from the other end.
(vi) Punching: Punching is a main forging operation used for producing hole in metal plate by using a tool known as punch. The metal plate is placed over the hollow cylindrical die and punch is placed above it at required location where hole is being made. For punching a hole, the metal job must be at near welding heat and the punch is driven part way through the job with hammer blows. The work is then turned over and the hole is completed from the other side. The above said practice is adopted for thicker jobs.