Hot Extrusion: It is the process of enclosing the heated billet or slug of metal in a closed cavity and then pushing it to flow from only one die opening so that the metal will take the shape of the opening. The pressure is applied either hydraulically or mechanically. Extrusion process is identical to the squeezing of tooth paste out of the tooth paste tube. Tubes, rods, hose, casing, brass cartridge, moulding-trims, structural shapes, aircraft parts, gear profiles, cable sheathing etc. are some typical products of extrusion. Using extrusion process, it is possible to make components, which have a constant cross-section over any length as can be had by the rolling process. The intricacy in parts that can be obtained by extrusion is more than that of rolling, because the die required being very simple and easier to make. Also extrusion is a single pass process unlike rolling. The amount of reduction that is possible in extrusion is large. Generally brittle materials can also be easily extruded. It is possible to produce sharp corners and reentrant angles. It is also possible to get shapes with internal cavities in extrusion by the use of spider dies, which are explained later.
The extrusion setup consists of a cylinder container into which the heated billet or slug of metal is loaded. On one end of the container, the die plate with the necessary opening is fixed. From the other end, a plunger or ram compresses the metal billet against the container walls and the
die plate, thus forcing it to flow through the die opening, acquiring the shape of the opening. The extruded metal is then carried by the metal handling system as it comes out of the die. The extrusion ratio is defined as the ratio of cross- sectional area of the billet to that of the extruded section. The typical values of the extrusion ratio are 20 to 50. Horizontal hydraulic presses of capacities between 250 to 5500 tonnes are generally used for conventional extrusion. The pressure requirement for extrusion is varying from material to material. The extrusion pressure for a given material depends on the extrusion temperature, the reduction in area and the extrusion speed.

Different methods of extrusion are shown in Fig. 1. Each method is described as under.

Direct or Forward Hot Extrusion: Fig. 1 (a) shows the direct extrusion operational setup. In this method, the heated metal billet is placed in to the die chamber and the pressure is applied through ram. The metal is extruded through die opening in the forward direction, i.e. the same as that of the ram. In forward extrusion, the problem of friction is prevalent because of the relative motion between the heated metal billet and the cylinder walls. To reduce such friction, lubricants are to be commonly used. At lower temperatures, a mixture of oil and graphite is generally used.
The problem of lubrication gets compounded at the higher operating temperatures. Molten glass is generally used for extruding steels.

Indirect or Backward Hot Extrusion: Fig. 1 (b) shows the indirect extrusion operational setup. In indirect extrusion, the billet remains stationary while the die moves into the billet by the hollow ram (or punch), through which the backward extrusion takes place. Since, there is no friction force between the billet and the container wall, therefore, less force is required by this method. However this process is not widely used because of the difficulty occurred in providing support for the extruded part. 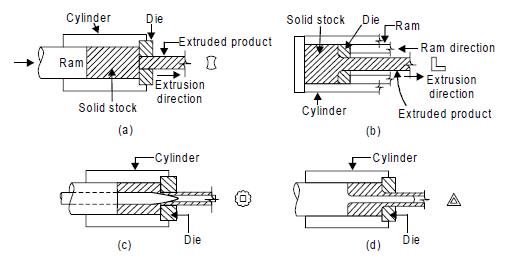 Tube Extrusion: Fig. 1(c and d) shows the tube extrusion operational setup. This process is an extension of direct extrusion process where additional mandrel is needed to restrict flow of metal for production of seamless tubes. Aluminium based toothpaste and medicated tubes are produced using this process.