Introduction of Casting: Casting process is one of the earliest metal shaping techniques known to human being. It means pouring molten metal into a refractory mold cavity and allows it to solidify. The solidified object is taken out from the mold either by breaking or taking the mold apart. The solidified object is called casting and the technique followed in method is known as casting process. The casting process was discovered probably around 3500 BC in Mesopotamia. In many parts of world during that period, copper axes (wood cutting tools) and other flat objects were made in open molds using baked clay. These molds were essentially made in single piece. The Bronze Age 2000 BC brought forward more refinement into casting process. For the first time, the core for making hollow sockets in the cast objects was invented. The core was made of baked sand. Also the lost wax process was extensively used for making ornaments using the casting process. Casting technology was greatly improved by Chinese from around 1500 BC. For this there is evidence of the casting activity found in China. For making highly intricate jobs, a lot of time in making the perfect mold to the last detail so hardly any finishing work was required on the casting made from the molds. Indus valley civilization was also known for their extensive use of casting of copper and bronze for ornaments, weapons, tools and utensils. But there was not much of improvement in the casting technology. From various objects that were excavated from the Indus valley sites, they appear to have been
familiar with all the known casting methods such as open mold and piece mold. This chapter describes the fluidity of molten metal, different casting techniques and various casting defects occurring in casting processes.

SIGNIFICANCE OF FLUDITY: Fluidity of molten metal helps in producing sound casting with fewer defects. It fills not only the mold cavity completely and rapidly but does not allow also any casting defect like “misrun” to occur in the cast object. Pouring of molten metal properly at correct temperature plays a significant role in producing sound castings. The gating system performs the function to introduce clean metal into mold cavity in a manner as free of turbulence as possible. To produce sound casting gate must also be designed to completely fill the mold cavity for preventing casting defect such as misruns and to promote feeding for establishing proper temperature gradients. Prevent casting defect such as misruns without use of excessively high pouring temperatures is still largely a matter of experience. To fill the complicated castings sections completely, flow rates must be high but not so high as to cause turbulence. It is noted that metal temperature may affect the ability of molten alloy to fill the mold, this effect is metal fluidity. 1t include alloy analysis and gas content, and heat-extracting power of the molding material. Often, it is desirable to check metal fluidity before pouring using fluidity test. Fig.1 illustrates a standard fluidity spiral test widely used for cast steel.
“Fluidity” of an alloy is rated as a distance, in inches, that the metal runs in the spiral channel. Fluidity tests, in which metal from the furnace is poured by controlled vacuum into a flow channel of suitable size, are very useful, since temperature (super-heat) is the most 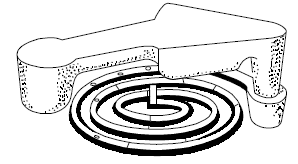 significant single variable influencing the ability of molten metal to fill mold. This test is an accurate indicator of temperature. The use of simple, spiral test, made in green sand on a core poured by ladle from electric furnace steel melting where temperature measurement is costly and inconvenient. The fluidity test is same times less needed except as a research tool, for the lower melting point metals, where pyrometry is a problem. In small casting work, pouring is done by means of ladles and crucibles.