Open fire and stock fire furnace: The fire itself plays an important part on the efficient heating of stock and it must be kept clean, free from excess dust or clinkers. Work which is laid on top of the fire will get hot underneath and remain colder on the top use it is exposed to the atmosphere, and uneven heating will result. In the same way, work which is red low in the fire but at the same time against the tuyre will become hot on one side, but will have a blast of clod air blowing against it, from the tuyre on the other side. The correct position for heating the job is in the hearth of the fire. The most common methods of firing in forging are namely open fire and stock fire which are discussed as under.

Open fire: Open fire is shown in Fig.1. This type of fire is highly convenient for general heating work and is made up in the hollow space in front of tuyre nozzle with coke left from the last fire, covered with green petroleum. As the fire burns away, coke from the top and sides is drawn into the centre, and its place is taken by more green coal taken from the supply maintained on the front place of the forge or taken from the outside. The jobs or work-pieces must be covered with a layer of coal, and to obtain a flame at single spot, the coal should be slightly damped with water and pressed down with a flat shovel. In the spot where the flame is desired, the coal should be loosened with a pocker. To ensure uniform heating of work on all sides, it must be turned round from time to time.

Stock fire:A stock fire is depicted through Fig.2 which is intended to last for several hours. This type of fire is commonly useful in dealing with
large pieces, when a heat may have to be kept for sometime. The job or work has to be turned in all directions to ensure uniform heating of
the job. Such fire is made up around a block of the desired size which is placed near the tuyer nozzle and upon which coal damped with water
that is closely built into the form of a mound or “stock”. Fine coal or pulverized coal is suitable for use in stock fire. The block is then withdrawn from the bed of the hearth with a turning force to prevent the stock from being broken and a tunnel is thus formed with an opening at the top. The fire is then lighted in the hollow space. From the bottom of the tunnel a small amount of coal is removed and a cavity is formed in the place in to which clinker may fall. Here the work is heated, being carefully covered with freshly coke fuel from time to time as the fire burns away. 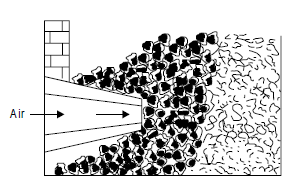 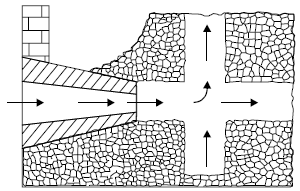 Fuels used in forging shop: The fuels used in forging shop are classified as solid, liquid and gaseous fuels which are discussed as under.
Solid fuels: Wood, coal, anthracite, peat, charcoal, coke, pulverized fuel etc.
Liquid fuels: Crude oil, petroleum, kerosene, tar oil etc.
Gaseous fuels: Natural gas and some artificially produced gases are used generate heat.
A good fuel should have always possesses the following essential characteristic which are given as under.