Cutting Tool: Cutting tools performs the main machining operation. They comprise of single point cutting tool or multipoint cutting tools. It is a body having teeth or cutting edges on it. A single point cutting tool (such as a lathe, shaper and planner and boring tool) has only one cutting edge, whereas a multi-point cutting tool (such as milling cutter, milling cutter, drill, reamer and broach) has a number of teeth or cutting edges on its periphery. Single Point Cutting Tools
There are mainly two types of single point tools namely the solid type as shown in Fig.1 and the tipped tool (Fig 2). The solid type single point tool may be made from high speed steel, from a cast alloy. Brazed tools (Fig.3) are generally known as tool bits and are used in tool holders. The tipped type of tool is made from a good shank steel on which is mounted a tip of cutting tool material. Tip may be made of high speed steel or cemented carbide. In addition to this, there are long index-able insert tools and throwaway. The Insert type tool throwaway refers to the cutting tool insert which is mechanically held in the tool holder. The inserts are purchased which are ready for use. When all cutting edges are used, the insert is discarded and not re-sharpened. These tools can be further classified depending upon the operations for which they are used and the type of the shank (straight or bent shank type). Tools may be of the types planning tools, turning tools, facing tool, boring tools, parting and slotting tools etc. Different types of carbide tips are generally used on tipped tool. In general the straight shank type tools are cheaper to manufacture as compared to bent shank type. But bent shank type can be used for turning either longitudinal or cross feed without resetting and for turning, facing and chamfering operations. Boring tools usually quite long and the crosssection is small.

A single point cutting tool can be understood by its geometry (Fig.4). Geometry comprises mainly of nose, rake face of the tool, flank, heel and shank etc. The nose is shaped as conical with different angles. The angles are specified in a perfect sequence as American Society of Tool Manufacturer for recognizing them as under.

Nomenclature Single Point Tool: The elements of tool signature or nomenclature single point tool is illustrated in Fig. 5
(i) Back rake angle: It is the angle between the face of the tool and a line parallel with base of the tool measured in a perpendicular plane through the side cutting edge. If the slope face is downward toward the nose, it is negative back rake angle and if it is upward toward nose, it is positive back rake angle. This angle helps in removing the chips away from the work piece.
(ii) Side rake angle: It is the angle by which the face of tool is inclined side ways. This angle of tool determines the thickness of the tool behind the cutting edge. It is provided on tool to provide clearance between work piece and tool so as to prevent the rubbing of work- piece with end flake of tool. It is the angle between the surface the flank immediately below the point and the line down from the point perpendicular to the base. 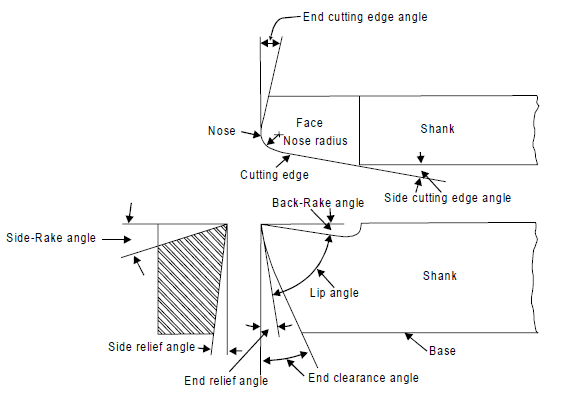 (vii) Nose radius: It is the nose point connecting the side cutting edge and end cutting edge. It possesses small radius which is responsible for generating surface finish on the work-piece