Indexing and Dividing Heads: Indexing is the operation of dividing the periphery of a piece of work into any number of equal parts. In cutting spur gear equal spacing of teeth on the gear blank is performed by indexing. Indexing is accomplished by using a special attachment known as dividing head or index head as shown in Fig. 1. The dividing heads are of three types:
(1) Plain or simple dividing head,
(2) Universal dividing head and
(3) Optical dividing head. 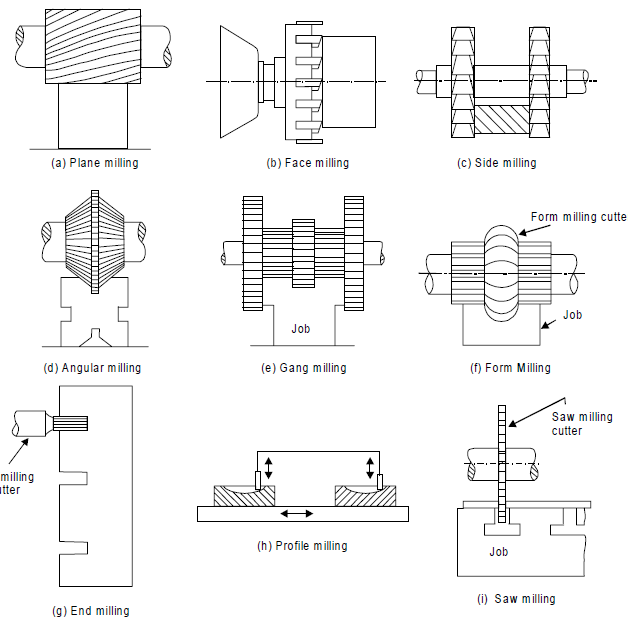 Plain or Simple Dividing Head: The plain dividing head comprises a cylindrical spindle housed on a frame, and a base bolted to the machine table. The index crank is connected to the tail end of the spindle directly, and the crank and the spindle rotate as one unit. The index plate is mounted on the spindle and rotates with it. The spindle may be rotated through the desired angle and then clamped by inserting the clamping lever pin into anyone of the equally spaced holes or slots cut on the periphery of the index plate. This type of dividing head is used for handling large number of workpieces, which require a very small number of divisions on the periphery.
1. Swiveling block, 2. Live centre, 3. Index crank 4. Index plate.

OPERATIONS PERFORMED ON MILLING MACHINE: Unlike a lathe, a milling cutter does not give a continuous cut, but begins with a sliding motion between the cutter and the work. Then follows a crushing movement, and then a cutting operation by which the chip is removed. Many different kinds of operations can be performed on a milling machine but a few of the more common operations will now be explained. These are:
Plain milling or slab milling: Fig. 2(a) illustrates the plain and slab milling operation. It is a method of producing a plain, flat, horizontal surface parallel to the axis of rotation of the cutter.

Straddle milling: It is a method of milling two sides of a piece of work by employing two side-milling cutters at the same time.
Thread milling: It is a method of milling threads on dies, screws, worms, etc. both internally and externally. As an alternative to the screw cutting in a lathe, this method is being more extensively introduced now a day in modern machine shops.