Introduction to Lathe Machine: Lathe is one of the most versatile and widely used machine tools all over the world. It is commonly known as the mother of all other machine tool. The main function of a lathe is to remove metal from a job to give it the required shape and size. The job is secure1y and
rigidly held in the chuck or in between centers on the lathe machine and then turn it against a single point cutting tool which wi1l remove meta1 from the job in the form of chips. Fig. 1 shows the working principle of lathe. An engine lathe is the most basic and simplest form of the lathe. It derives its name from the early lathes, which obtained their power from engines. Besides the simple turning operation as described above, lathe can be used to carry out other operations also, such as drilling, reaming, boring, taper turning, knurling, screwthread cutting, grinding etc.

TYPES OF LATHE: Lathes are manufactured in a variety of types and sizes, from very small bench lathes used for precision work to huge lathes used for turning large steel shafts. But the principle of operation and function of all types of lathes is same. The different types of lathes are:
1. Speed lathe
(a) Wood working
(b) Spinning
(c) Centering
(d) Polishing

Speed Lathe: Speed lathe is simplest of all types of lathes in construction and operation. The important parts of speed lathe are following-
(1) Bed
(2) Headstock
(3) Tailstock, and
(4) Tool post mounted on an adjustable slide.
It has no feed box, 1eadscrew or conventional type of carriage. The tool is mounted on the adjustable slide and is fed into the work by hand contro1. The speed lathe finds applications where cutting force is least such as in wood working, spinning, centering, polishing, winding, buffing etc. This lathe has been so named because of the very high speed of the headstock spindle.
Centre Lathe or Engine Lathe: The term “engine” is associated with this lathe due to the fact that in the very early days of its development it was driven by steam engine. This lathe is the important member of the lathe family and is the most widely used. Similar to the speed lathe, the engine lathe has all
the basic parts, e.g., bed, headstock, and tailstock. But its headstock is much more robust in construction and contains additional mechanism for driving the lathe spindle at multiple speeds. An engine lathe is shown in Fig. 2. Unlike the speed lathe, the engine lathe can feed the cutting tool both in cross and longitudinal direction with reference to the lathe axis with the help of a carriage, feed rod and lead screw. Centre lathes or engine lathes are
classified according to methods of transmitting power to the machine. The power may be transmitted by means of belt, electric motor or through gears.
Bench Lathe: This is a small lathe usually mounted on a bench. It has practically all the parts of an engine lathe or speed lathe and it performs almost all the operations. This is used for small and precision work. 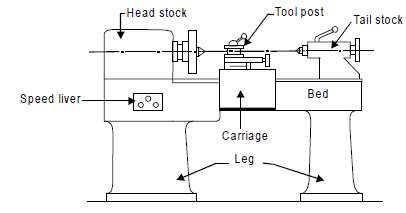 Tool Room Lathe: This lathe has features similar to an engine lathe but it is much more accurately built. It has a wide range of spindle speeds ranging from a very low to a quite high speed up to 2500 rpm. This lathe is mainly used for precision work on tools, dies, gauges and in machining
work where accuracy is needed.
Capstan and Turret Lathe: The development of these 1athes results from the technological advancement of the engine lathe and these are vastly used for mass production work. The distinguishing feature of this type of lathe is that the tailstock of an engine lathe is replaced by a hexagonal turret, on the
face of which multiple tools may be fitted and fed into the work in proper sequence. Due to this arrangement, several different types of operations can be done on a job without re-setting of work or tools, and a number of identical parts can be produced in the minimum time.
Special Purpose Lathes: These lathes are constructed for special purposes and for jobs, which cannot be accommodated or conveniently machined on a standard lathe. The wheel lathe is made for finishing the journals and turning the tread on railroad car and locomotive wheels. The gap bed lathe, in which a section of the bed adjacent to the headstock is removable, is used to swing extra-large-diameter pieces. The T-lathe is used for machining of rotors for jet engines. The bed of this lathe has T-shape. Duplicating lathe is one for duplicating the shape of a flat or round template on to the job.
Automatic Lathes: These lathes are so designed that all the working and job handling movements of the complete manufacturing process for a job are done automatically. These are high speed, heavy duty, mass production lathes with complete automatic control.