Lathe Operations: driven by anyone of the following methods.

The above methods for holding the job can be classified under two headings namely job held between centers and job held by a chuck or any other fixture. The various important lathe operations are depicted through Fig. 1 (a), (b) and (c). The operations performed in a lathe can be understood by three major categories

(a) Operations, which can be performed in a lathe either by holding the workpiece between centers or by a chuck are:
1. Straight turning, 2. Shoulder turning, 3. Taper turning, 4. Chamfering, 5. Eccentric turning, 6. Thread cutting, 7. Facing 8. Forming, 9. Filing 10. Polishing
11. Grooving 12. Knurling , 13. Spinning, 14. Spring winding

(b) Operations which are performed by holding the work by a chuck or a faceplate or an angle plate are:
1. Undercutting, 2. Parting-off, 3. Internal thread cutting,  4. Drilling, 5. Reaming, 6. Boring, 7. Counter boring 8. Taper boring, 9. Tapping

(c) Operations which are performed by using special lathe attachments are:
1. Milling 2. Grinding 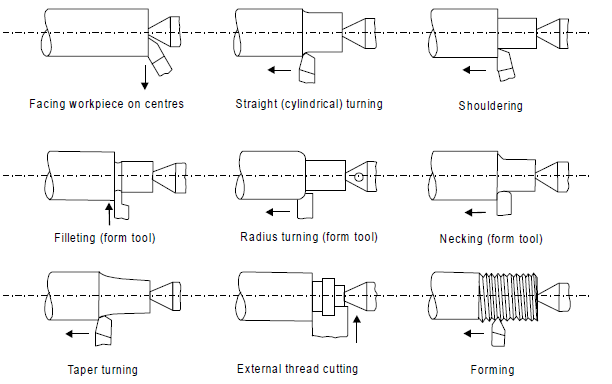 Some of the important operations performed on a lathe machine are discussed as under.