1. Drilling 2. Reaming
3. Boring 4. Counter boring
5. Countersinking 6. Spot facing
7. Tapping 8. Lapping
9. Grinding 10. Trepanning.
The operations that are commonly performed on drilling machines are drilling, reaming, lapping, boring, counter-boring, counter-sinking, spot facing, and tapping. These operations are discussed as under.
Drilling: This is the operation of making a circular hole by removing a volume of metal from the job by a rotating cutting tool called drill as shown in Fig. 1. Drilling removes solid metal from the job to produce a circular hole. Before drilling, the hole is located by drawing two lines at right angle and a center punch is used to make an indentation for the drill point at the center to help the drill in getting started. A suitable drill is held in the drill machine and the drill machine is adjusted to operate at the correct cutting speed. The drill machine is started and the drill starts rotating. Cutting fluid is made to flow liberally and the cut is started. The rotating drill is made to feed into the job. The hole, depending upon its length, may be drilled in one or more steps. After the drilling operation is
complete, the drill is removed from the hole and the power is turned off.

Reaming: This is the operation of sizing and finishing a hole already made by a drill. Reaming is performed by means of a cutting tool called reamer as shown in Fig. 2. Reaming operation serves to make the hole smooth, straight and accurate in diameter. Reaming operation is performed by means of a multitooth tool called reamer. Reamer possesses several cutting edges on outer periphery and may be classified as solid reamer and adjustable reamer.

Boring: Fig. 3 shows the boring operation where enlarging a hole by means of adjustable cutting tools with only one cutting edge is accomplished. A boring tool is employed for this purpose.

Counter-Boring: Counter boring operation is shown in Fig. 4. It is the operation of enlarging the end of a hole cylindrically, as for the recess for a counter-sunk rivet. The tool used is known as counter-bore.

Counter-Sinking: Counter-sinking operation is shown in Fig. 5. This is the operation of making a coneshaped enlargement of the end of a hole, as for the recess for a flat head screw. This is done for providing a seat for counter sunk heads of the screws so that the latter may flush with the main surface of the work. 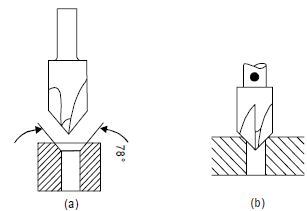 Lapping: This is the operation of sizing and finishing a hole by removing very small amounts of material by means of an abrasive. The abrasive material is kept in contact with the sides of a hole that is to be lapped, by the use of a lapping tool.

Spot-Facing: This is the operation of removing enough material to provide a flat surface around a hole to accommodate the head of a bolt or a nut. A spot-facing tool is very nearly similar to the